Posted by Grazing BestPrac at 3:34 AM No comments:

Grazing Management after the FLOODS!!!

Rest is your biggest opportunity 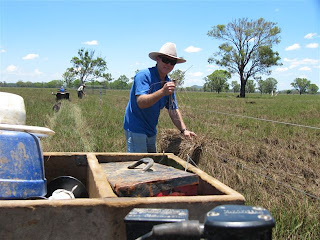 We are in the midst of the most widespread flood event in recent history with central Queensland, the central west, southern Queensland and northern NSW all suffering to various degrees. Paddocks are drenched, pastures are stressed, emotions are high and still decisions need to be made for the future of stock and crops.
In the past few days, I have had many conversations with pasture and cropping specialists and graziers in the central Queensland region about how to get the best response from pastures which have been waterlogged and in some cases inundated for up to 20 days. This is a major issue across the region, which will affect most graziers and farmers to some degree. Very little is known about waterlogged pastures or the most appropriate action. And it is only the past few days that many producers have had the opportunity to even drive or ride around to inspect pastures and crops. I have had the opportunity to inspect several paddocks that have been both waterlogged and also covered in a layer of fine silt in the past few weeks. So, I believe it is important to understand what has happened and look at some opportunities for recovery.
There are generally two types of floods. The first is often described as a "flash flood" which usually covers pastures from one to four days. The second is a"prolonged" flood which extends for five or more days of flood waters covering a pasture. If plants are covered for more than a few days, they will die.
In a normal year, soils are generally friable and open with millions of air pores that supply oxygen to plant roots, soil microbes and insects. However, once pastures have been waterlogged for any period, the air pores in the soil reduce until eventually the microbes cannot source oxygen and the soil becomes anaerobic. Low levels of oxygen in the root zone trigger the adverse effects of waterlogging on plant growth. Waterlogging of the seedbed and inundation, most affect germinating seeds and young seedlings. Established plants are most affected when they are growing rapidly as root tips begin to die within a few days of waterlogging. The shallow root systems that then develop limit the uptake of nutrients (particularly nitrogen) and water.
Nitrogen is lost from waterlogged soils by leaching and denitrification (degassing). These losses, together with the lowered ability of plants to absorb nutrients from waterlogged soil, cause the older leaves to yellow. Waterlogging also directly reduces nitrogen fixation by the nodules of legume crops and pastures. Some native pastures have started to respond to the warm weather, but a slow response from many improved species.
In a grazing situation, the flooded country is similar to coming out of a long drought as:
Our first thought may be to open the gates and let the stock spread out across the farm to fend for themselves. However, the most appropriate action needs to be:
Due to the floods and prolonged rain period, the whole region has:
·         Stressed pasture requiring at least 6 weeks rest
·         A shortened growing season
·         Reduced pasture yield
·         Less opportunity for free feeds
·         Stock walking weight off.
There is a need to
Cheers for now - Mick
Posted by Grazing BestPrac at 10:49 PM No comments:

Welcome to the Grazing BMP blog

Thankyou for taking the time to visit this blog.
Please read the latest info posted and let us know your thoughts on the relevance of this information.
Cheers,
Mick, Noela and the Team.